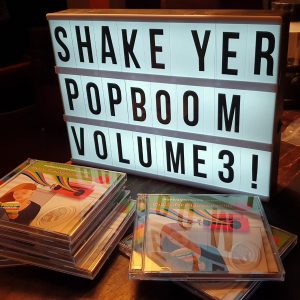 I can still remember the first time I met my friend Scotty Thurling. It was before or after a gig at the Punters Club Fitzroy with my band P76, circa ‘99 or 2000. He lobbed up, introduced himself and launched straight into a long, wide-ranging discussion about the local indie pop scene, the history of power pop and my previous band Jericho. We swapped contact details and kept in touch, marking the beginning of a longlasting friendship that has remained strong to this day.

Scotty was running a little mailorder business at the time called Popboomerang. He’d fossick around Melbourne’s second-hand record stores like Dixons and the bargain bins of Gaslight finding local indie pop nuggets and on-sell them to a little local and overseas network of pop enthusiasts. A couple of years later, he confided in me about the prospect of launching his own label. We talked about names, shared ideas about logos and before long, he was off and running with his fledgling little Melbourne label Popboomerang Records.

We ended up working together on whole bunch of releases, including some of my solo output, a Jericho retrospective, some Stoneage Hearts and various other bits and pieces. While he didn’t release everything I made, he was always there along the way as a trusted friend, fan and confidant – telling me exactly what he thought, guiding and shepherding my next move. It was Scotty who lovingly packaged up our mid-90’s Jericho recordings and released our retrospective compilation back in 2003. He was there alongside us, spurring us on when we recorded our P76 ‘Into the Sun’ album and it was Scotty who discovered an obscure demo I’d made back in 2014 called ‘the Melbourne Divide’ and talked me into recording it with our mutual friend Nick Batterham. Just eighteen months ago, he released my ‘Modern Architecture’ EP on vinyl, CD and digital. And then a month or so later, COVID came along.

Like with most things, Scotty and I had been privately chatting about the end of Popboomerang for quite a while – maybe a year or so. And today, after almost two decades of championing the best indie pop Australia has to offer, he texted me to say he’d made the call to put our beloved little label to rest. There’s no doubt the last eighteen months have been really hard for independent artists and labels alike. To his credit, Scotty and some likeminded friends have been working hard to create a 17,000 member strong community of 90’s indie music lovers called Sound As Ever. At a time when we’ve all been stuck at home and most bands have been unable to record or play live, they’ve brought a lot of joy to many of us by unearthing and sharing lost 90’s nuggets. It’s also given Scotty some to time to reflect on everything he’s achieved over the years and consider his next move, post-Popboomerang.

For many of us, Scotty’s little Popboomerang imprint has been the soundtrack of our Oz indie pop scene for almost 20 years. And while the unique shandy of indie, folk, twee and retrospective that held it all together is now over, a new(ish) era has begun, focusing on Scotty’s deep love of the Australian 90’s indie scene – Sound As Ever.

Back to news page